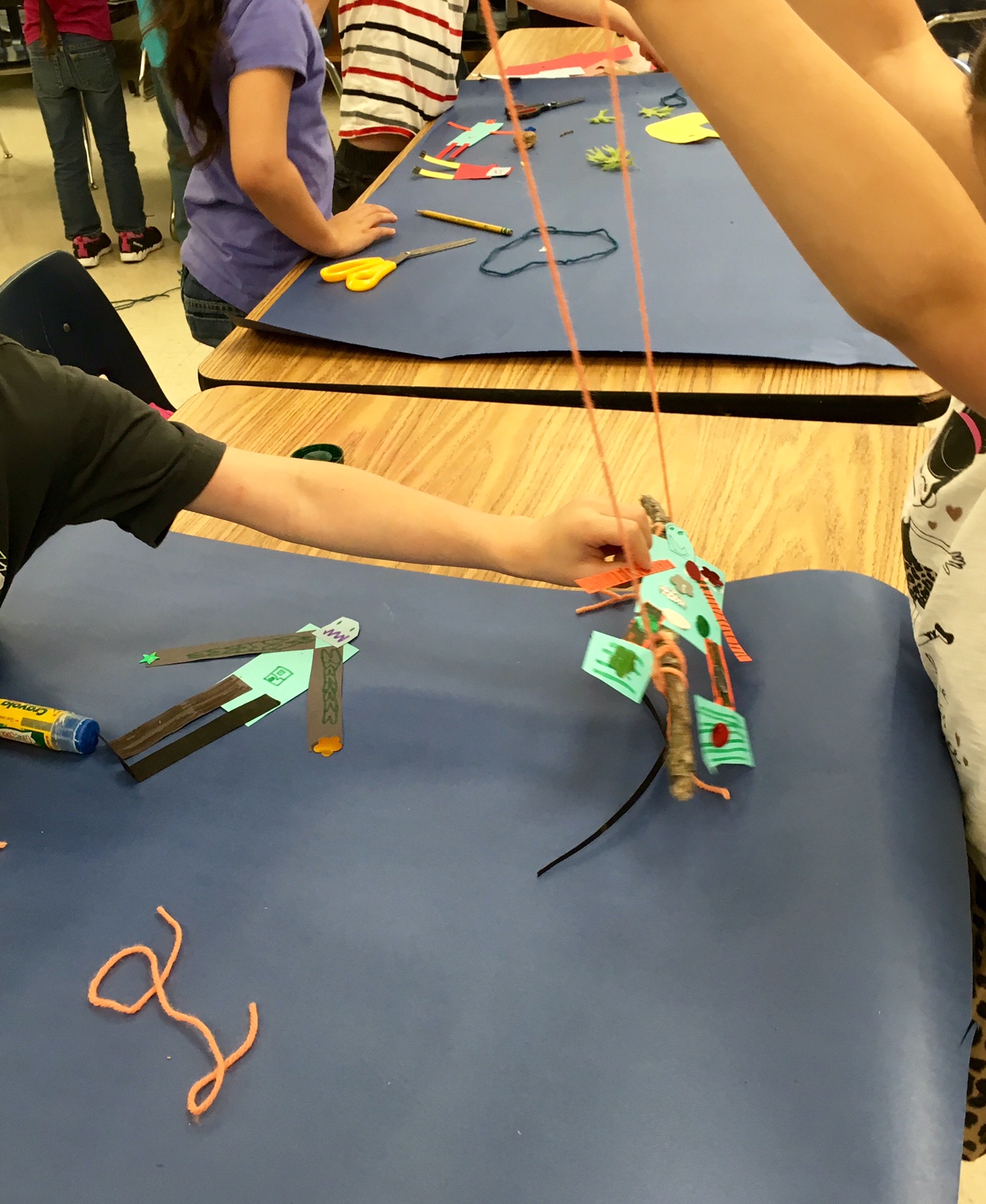 I’ve taught some version of the Kindergarten Robots collage art project for the last 3 years. The students build on their shape knowledge and vocabulary, then practice cutting those shapes out as parts of their robots. Then they practice their glue stick skills and learn how to put those shapes together to build their own robot. Then comes the fine tuning of drawing different line types and more shapes as decoration to make their robot even more amazing. They really enjoy making their own robots. 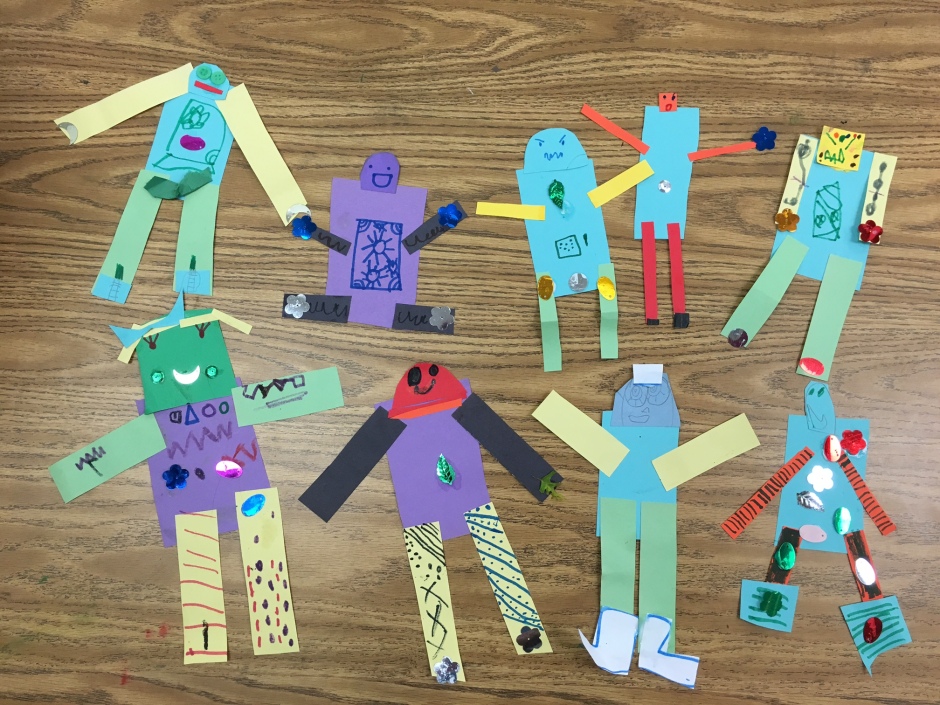 The first year we made this project, the kindergartners made their robots and glued them onto a plain piece of construction paper. The next year we made them, we first created a separate background of stamped circles and squares. Then we made our robots and glued them onto their backgrounds. But gluing their robots onto their backgrounds made the whole project so…static. Anyone who’s spent time with kindergartners knows that they’re the exact opposite of static. I wanted to channel the kindergartners’ natural excitement, movement, and imagination into this project. Enter the most recent time we made our robots… 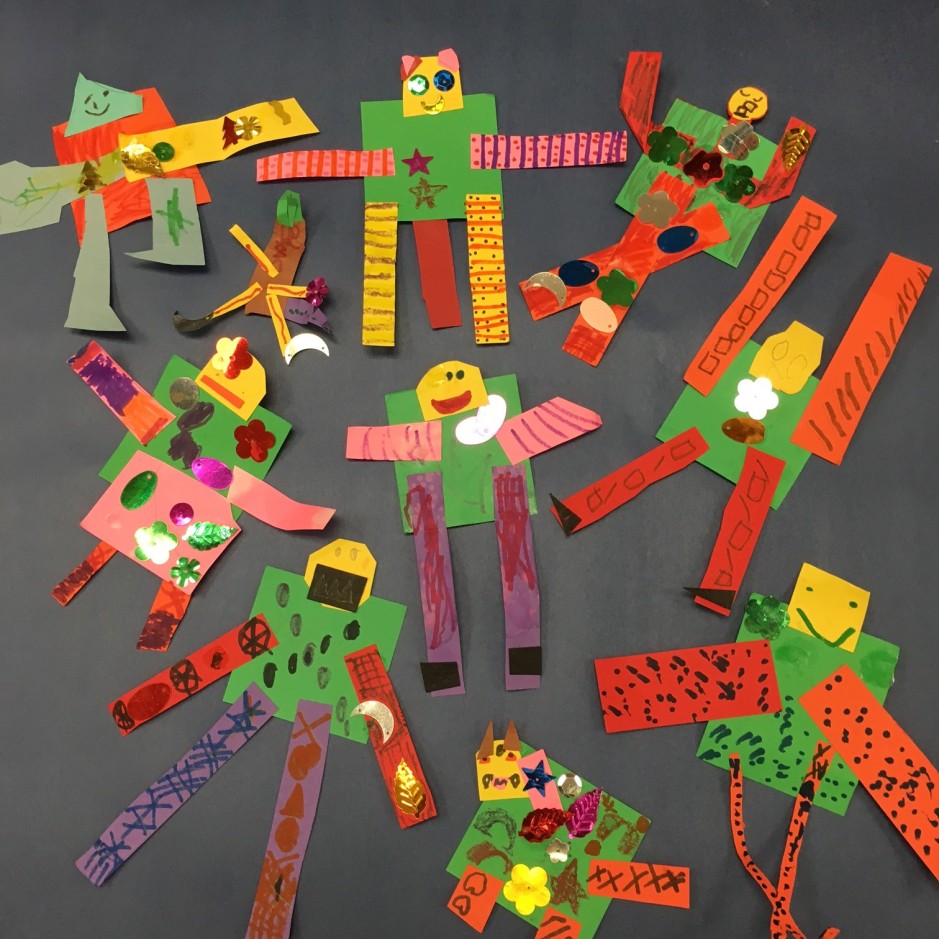 Just last year, I learned about something called Play Based Art Teaching. George Szekely’s website says “he (George Szekely) was among the first art educators to emphasize the importance of children’s play in art making and to advocate the study of children’s home art as the foundation for school art practice.” 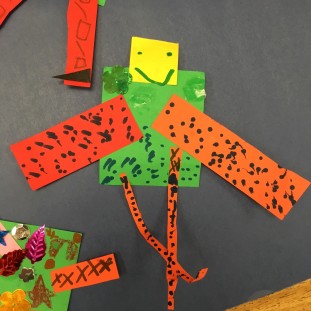 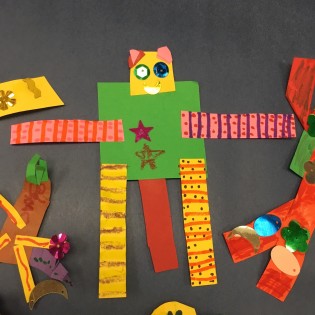 I was excited to try this new art teaching method in class! I spread out the pre-cut paper that covered their whole desks, and set out our art bins filled with crayons, colored pencils, markers, and glue sticks. 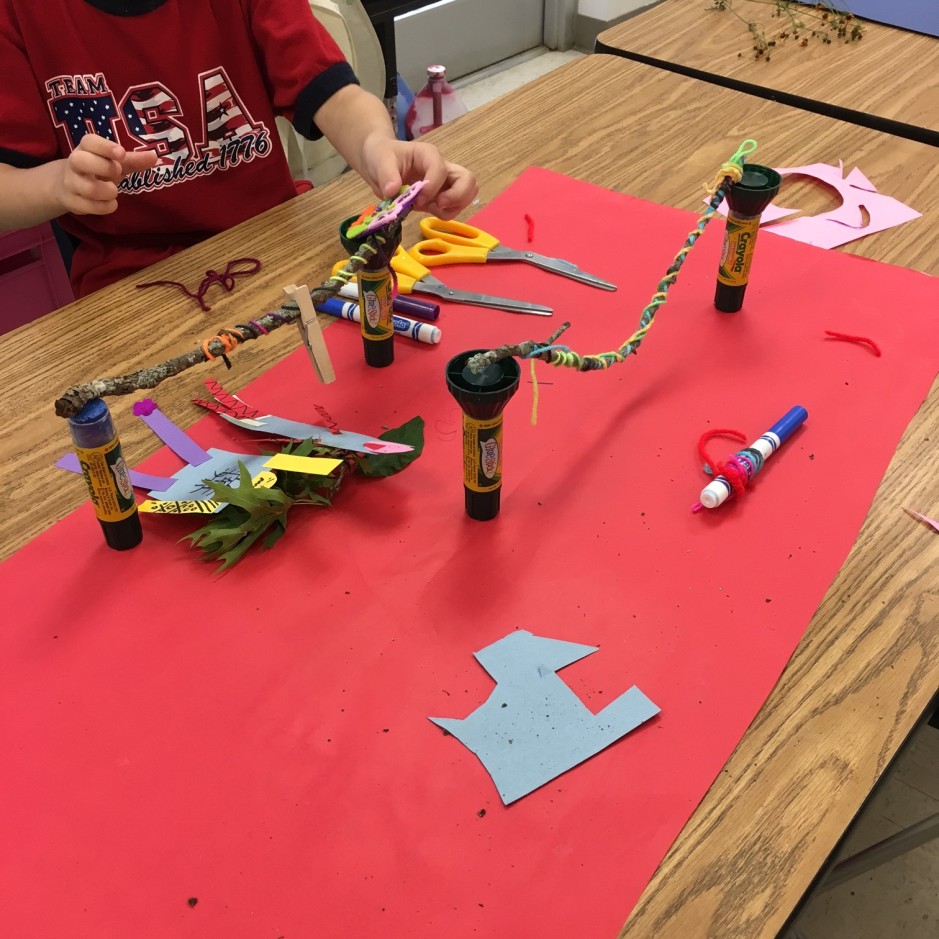 I encouraged them to imagine something they could draw to help their robot do it’s job even better (drawing a lake, a bridge, etc.) I passed out some leaves and sticks I collected from outside. I was hoping they wouldn’t stop at putting a leaf in their robot’s hand to say it was carrying a leaf, but I encouraged them to imagine that leaf or stick could be something their robot needed (a parachute, a hat, a digging machine, etc.) I also passed out some yarn and scissors to help them create whatever they imagined their robot needed. 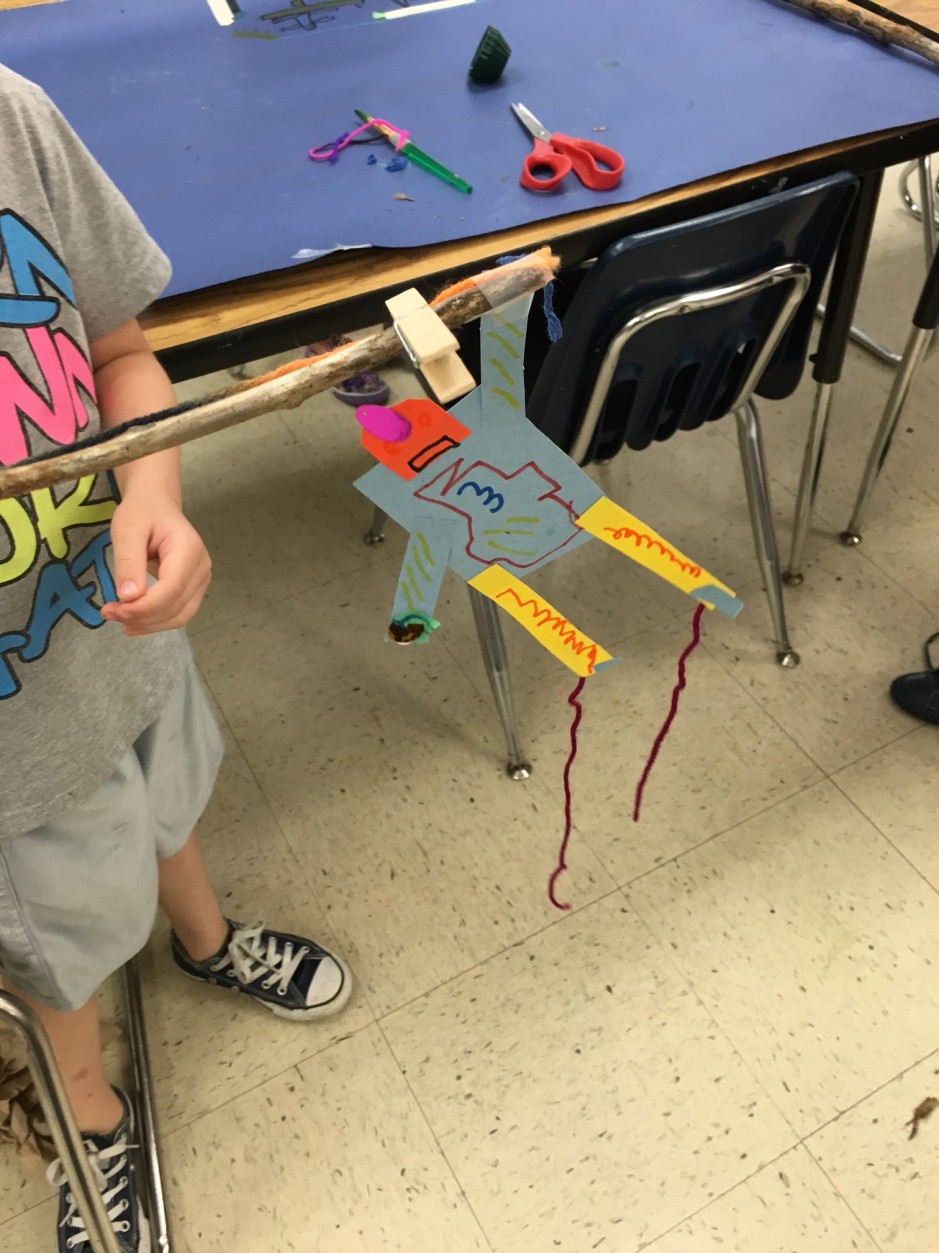 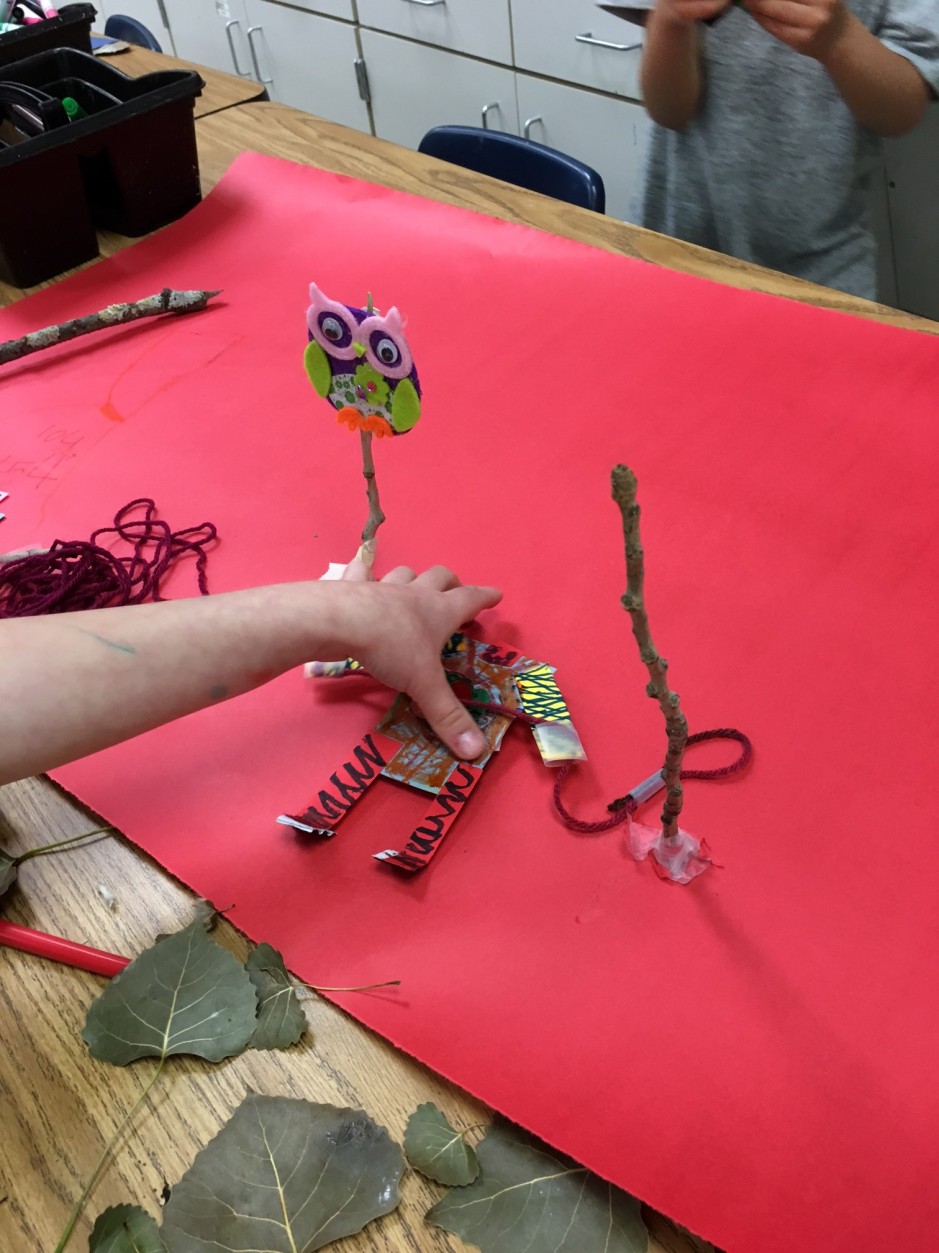 Unexpected but wonderful skills they learned in this project was working as a team at their table. I thought their work would be individual, but they talked about what they wanted to achieve together with the supplies they had. That was really neat to see unfold. 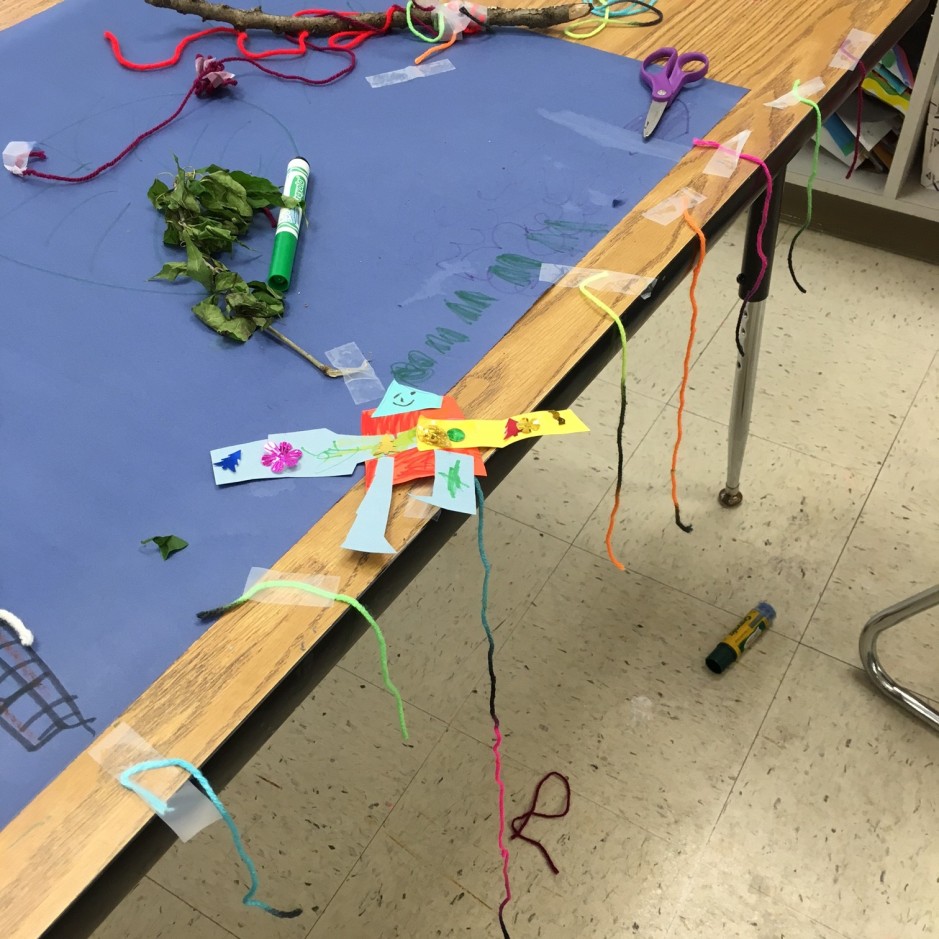 Another surprise skill this project provided was basic engineering! If they wanted their sticks to stand up straight from the paper, they had to figure out how to achieve that. Popular solutions were taping the stick to the paper or balancing it against the art bin. 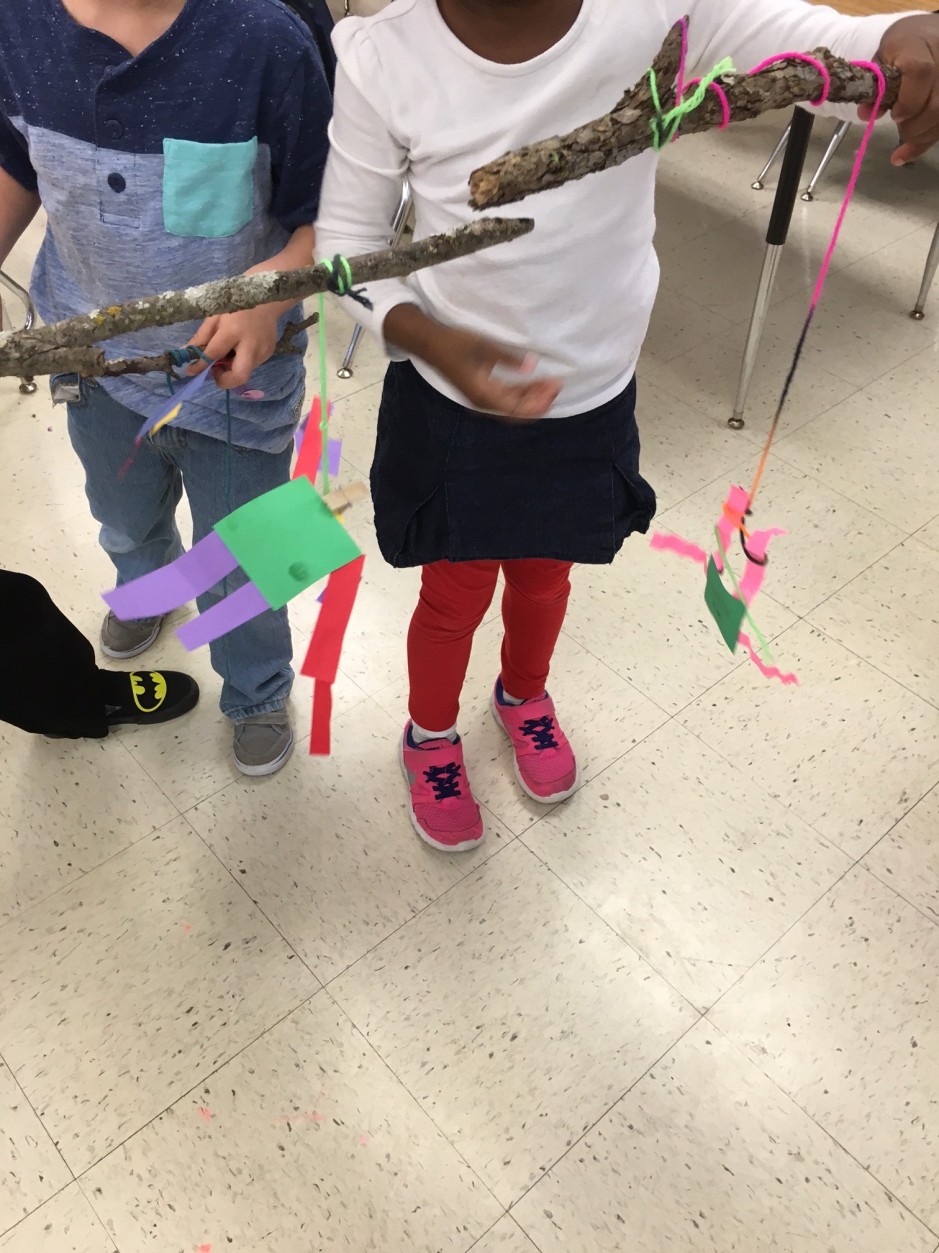 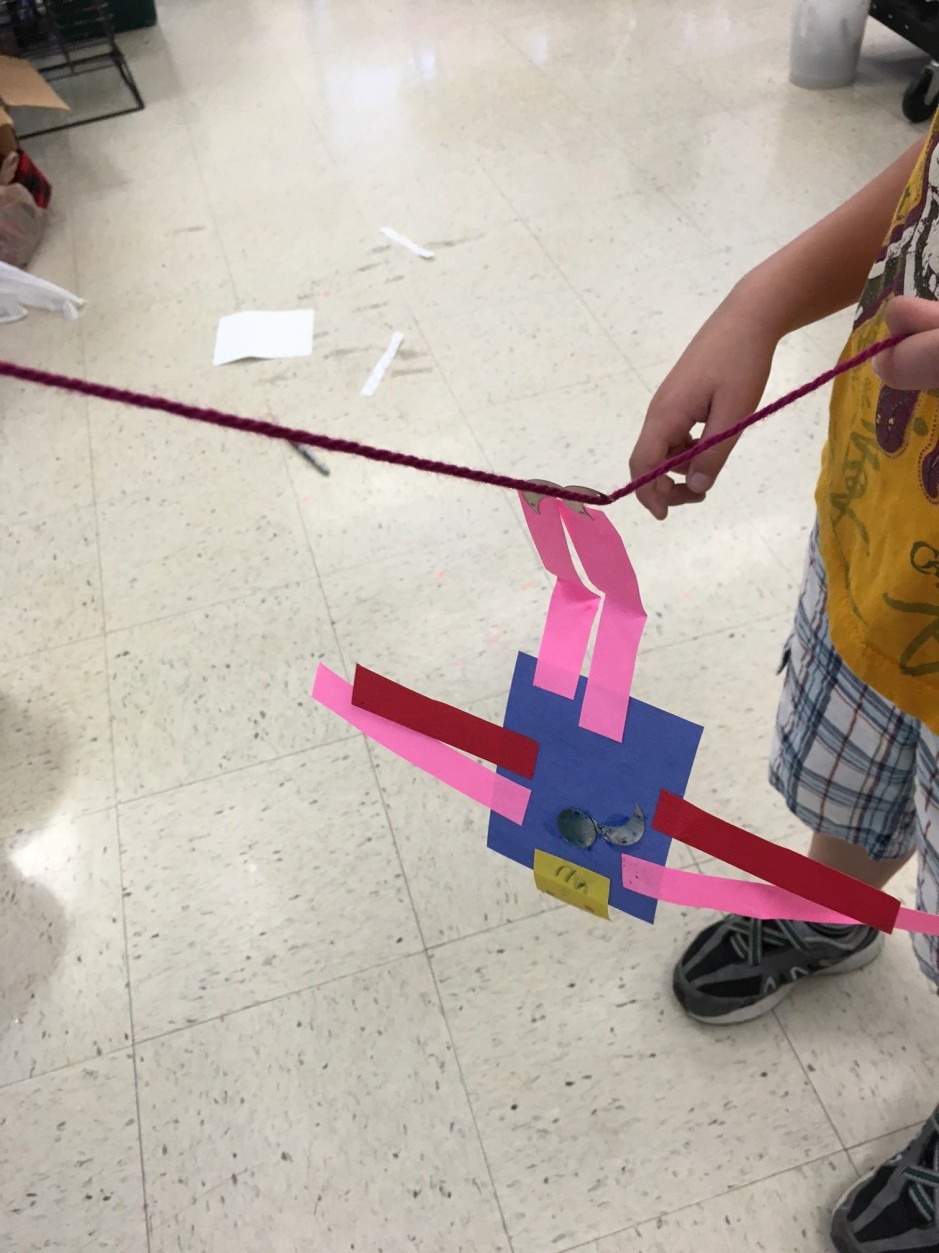 This is a project that will be repeated! Happy engaged kindergarten artists and creators. 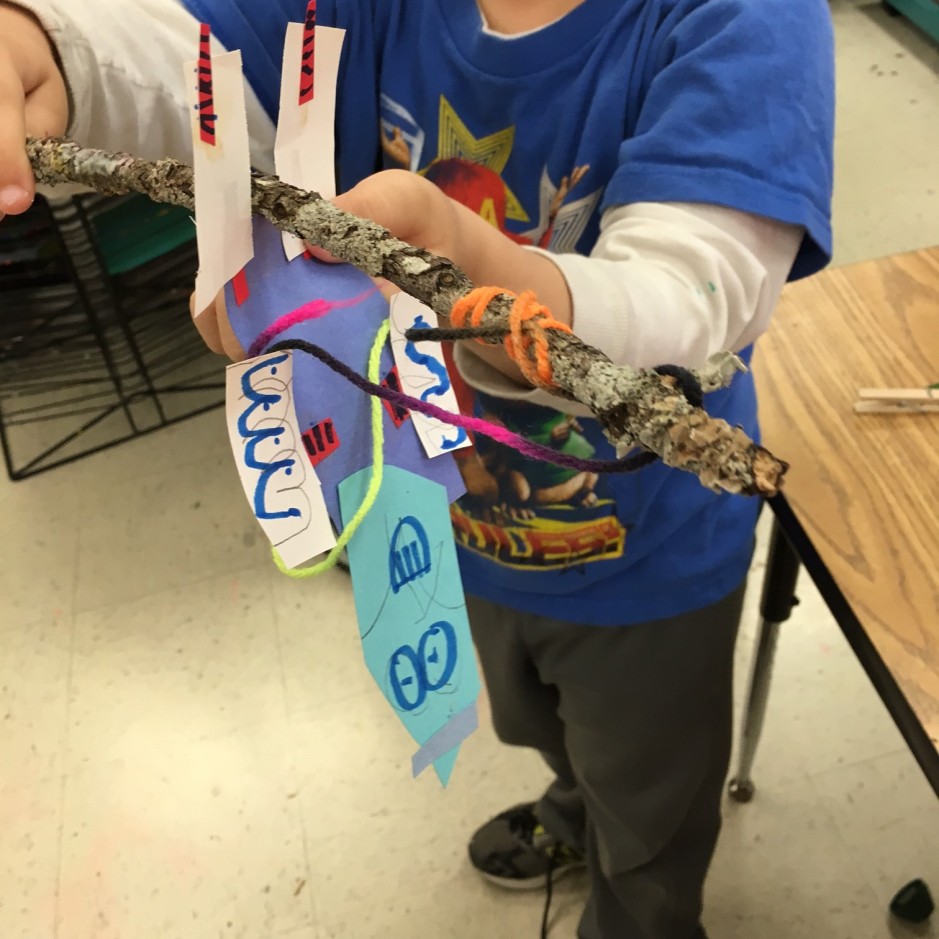 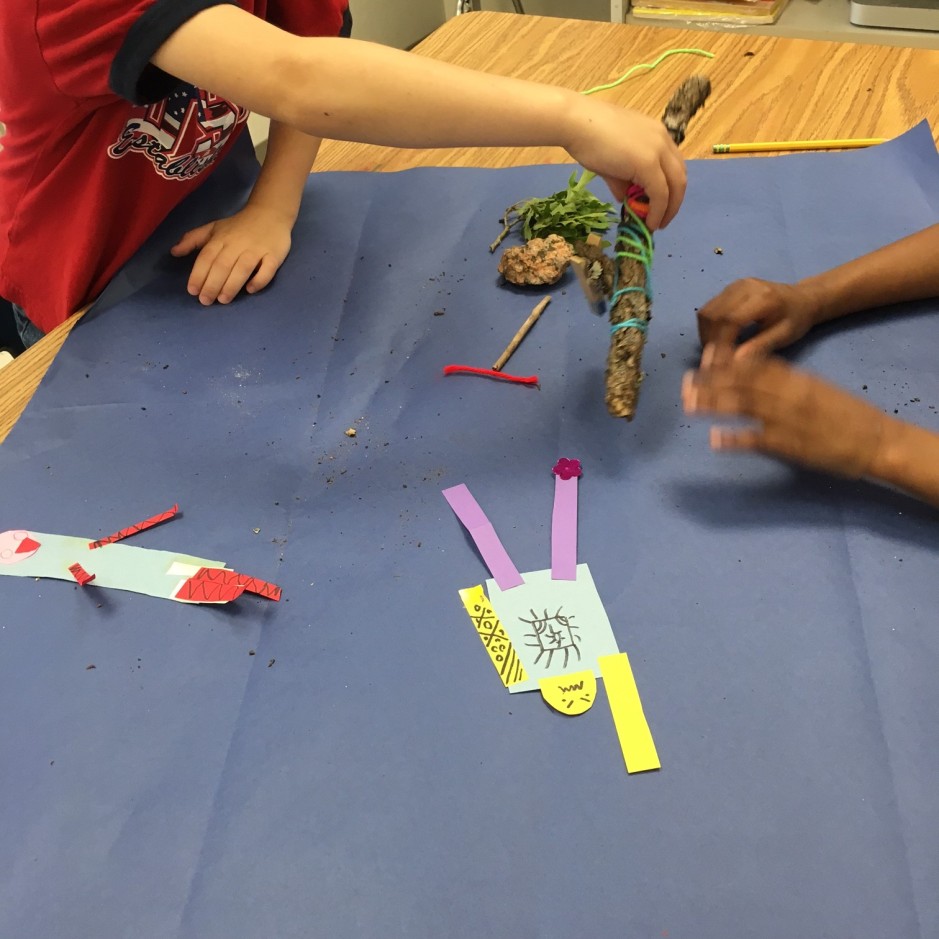 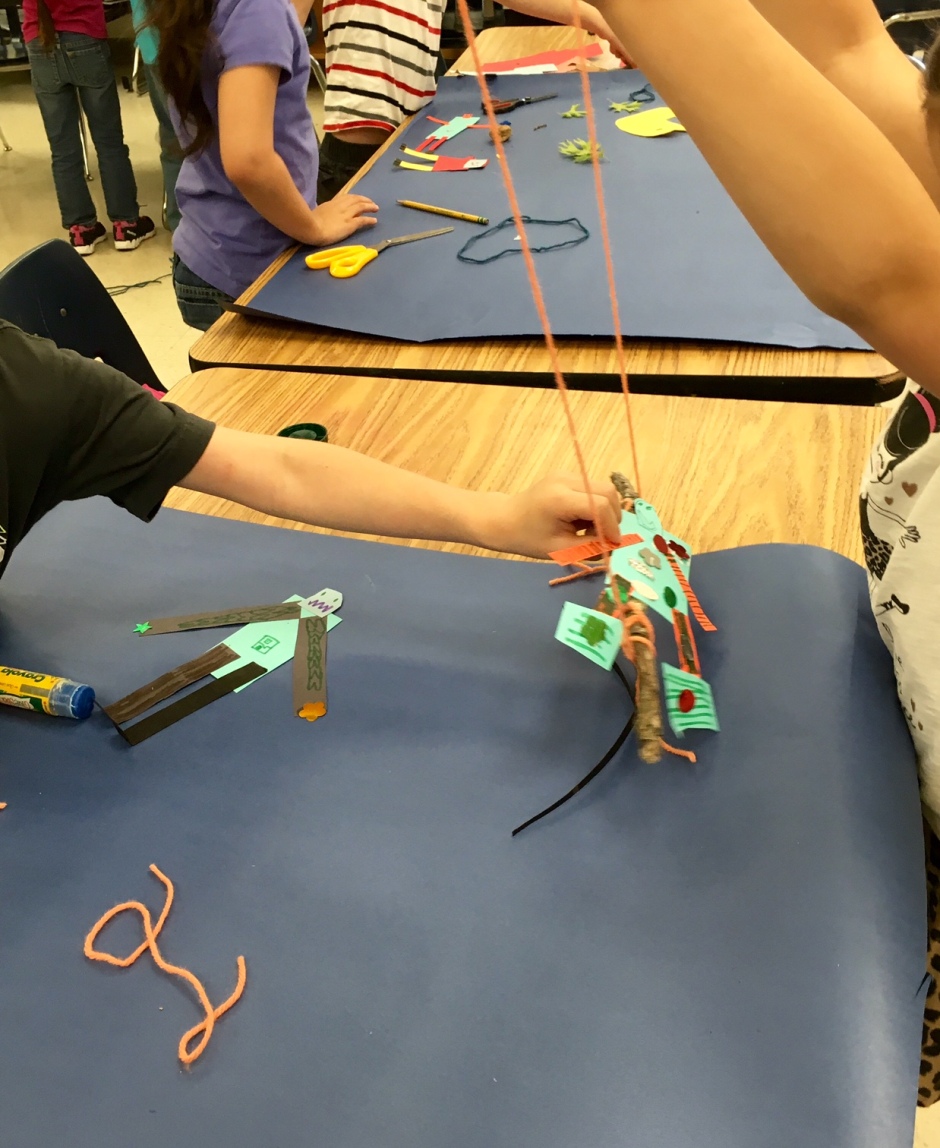 One thought on “Kindergarten Collaged Robots + Play Based Art”