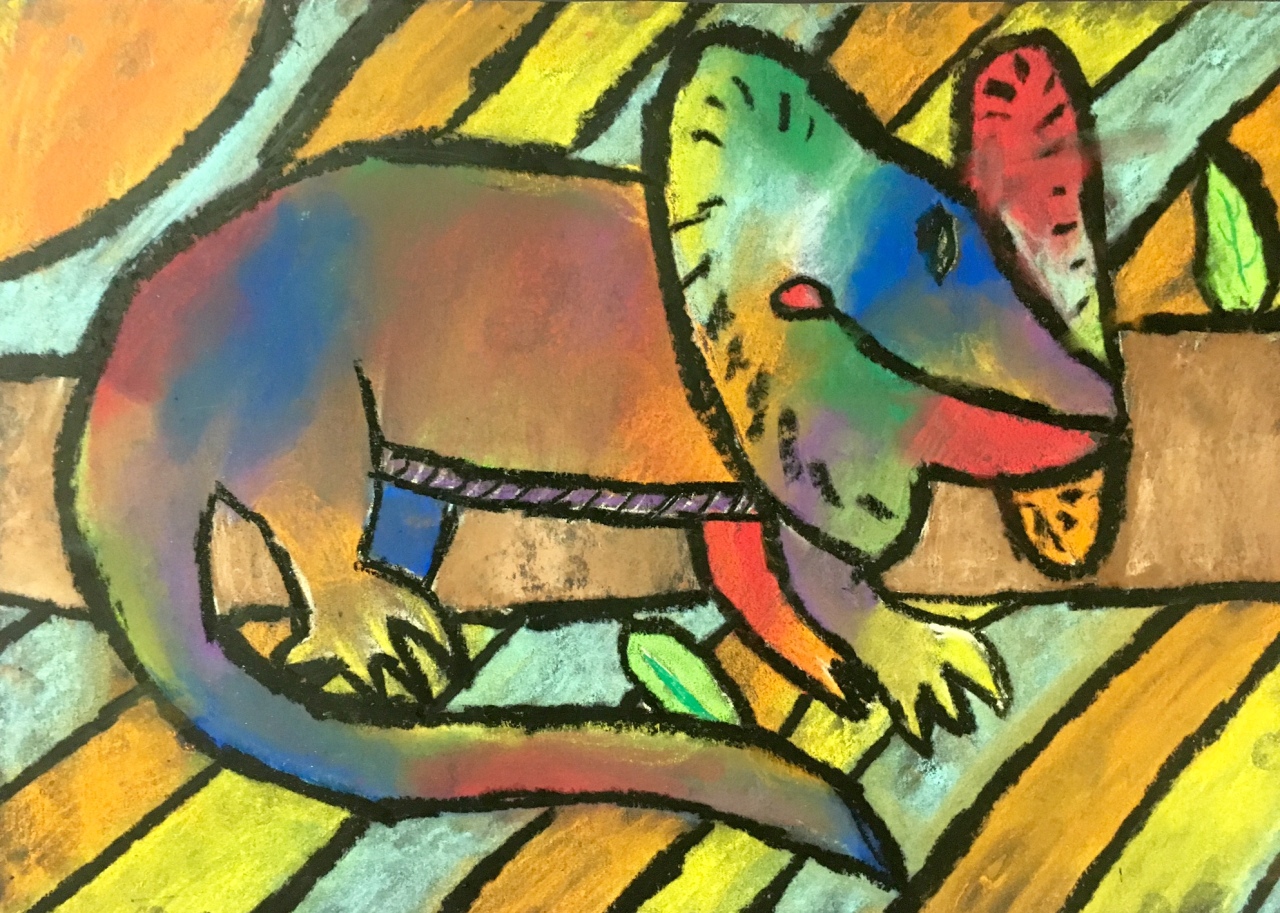 When things get messy in the art room, I always say “art is messy fun!”  This project proves it.  It’s my favorite 5th grade art project!  The students have to commit to a month-long (4 class periods) project for this one, but when they put in the effort, they are handsomely rewarded with a work 0f art to treasure and frame.

I got this idea from the incredible Patty Palmer of Deep Space Sparkle.  It’s a fantastic project for:

– mastering chalk pastel
-evaluating and immediately applying color theory for the highest contrast
-imagining how to make the background as exciting as the lizard
-experimenting different details to add to your lizard and your branch
-creating and evaluating the entire composition and making adjustments
-building “art stamina” to stick with a longer project
-creating their own reward for sticking with a longer project – their amazing lizard drawing!

For the science cross-curricular side of this project, we discussed as a class what makes a reptile different from a mammal, and we brainstormed the different speciess of reptiles together.  Some of the students had their own lizard connections, so we shared those as a class.

Then we looked at the various lizard species on the SmartBoard.  We looked at the usual suspects like bearded dragons, green anoles, chameleons, leopard geckos, and iguanas, but then we looked at some species that were new to the class.  Frilled lizards!  Blue-tongued skinks!  Water dragons!  Komodo dragons!

Now, we weren’t just looking at these like we were at a virtual zoo, we were looking at these more like comparative detectives.  We were comparing the claws, toes, eyes, scale shapes and colors and patterns, sizes, eye shapes, and tails of each of species with other species.

I found an awesome lizard clip on YouTube from Animal Planet that shows a lizard dancing and then it explains why they dance (to distribute the blistering heat in the desert so the lizard’s feet and belly don’t get burned.)  If you want to see a crowd-pleasing science clip, just include a lizard dancing to MC Hammer’s “Can’t Touch This.”

I demo’ed how to draw a lizard and how to draw a branch.  We looked at online examples of this project.  I taught this project last year, and I was surprised by the huge number of light blue skies.  So this year, we talked about how there’s nothing wrong with blue skies, but we talked about how many different colors the sky could be.  We looked at sunsets and skies on the SmartBoard to see how varied the skies can be.  I’m happy to say that this year’s skies were so much more creative!

I demo’ed how to blend the pastels, and reminded the students to wipe off the smeared chalk residue from their hands before they started another set of blending.  More color theory – any three colors combined turn brown.  Womp womp, unless you were going for a rich brown. 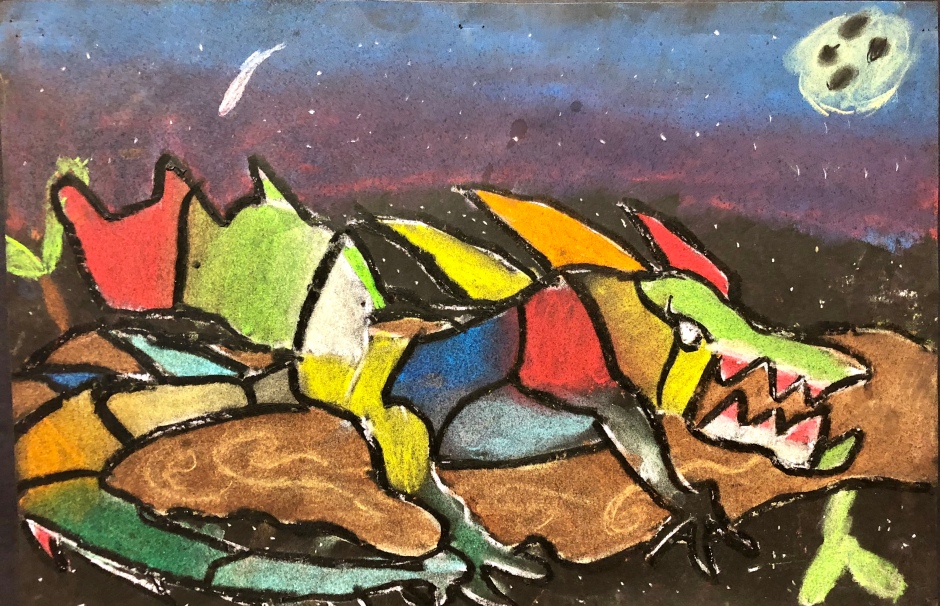 The pre-cut black papers were passed out and we started our drawings with regular chalk (not chalk pastel.)  Last year, we started with pencils.  Despite my continual class warning not to draw too small because it would make the drawings hard to fill in when they started adding pastel, it was a constant struggle.  5th graders usually draw small, and that won’t work with this large sheet of paper. 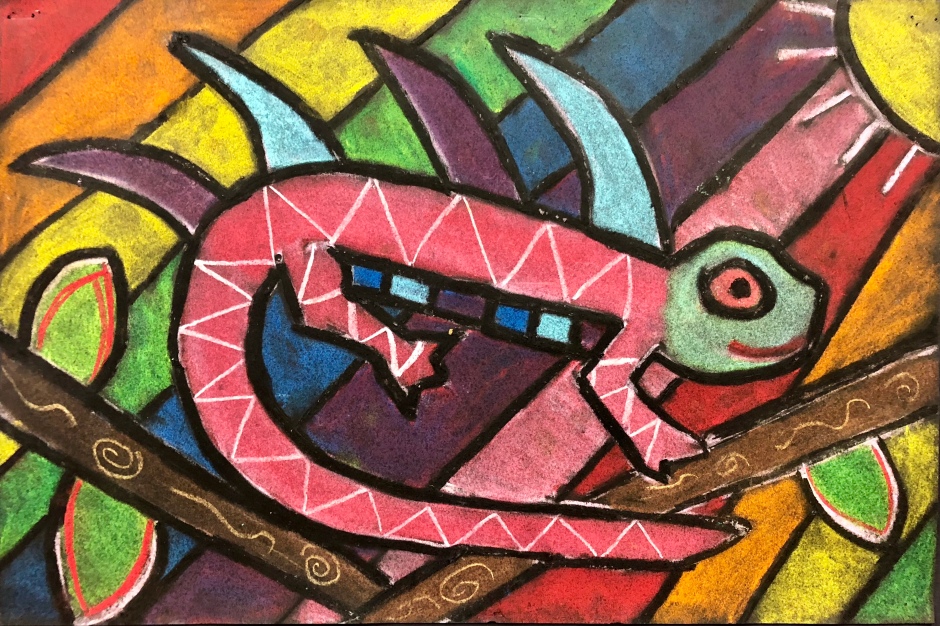 So this year, I replaced the pencils with sticks of chalk hoping that it would make the drawing size much more manageable (less tiny.)  It worked!  I was excited about that experiment. 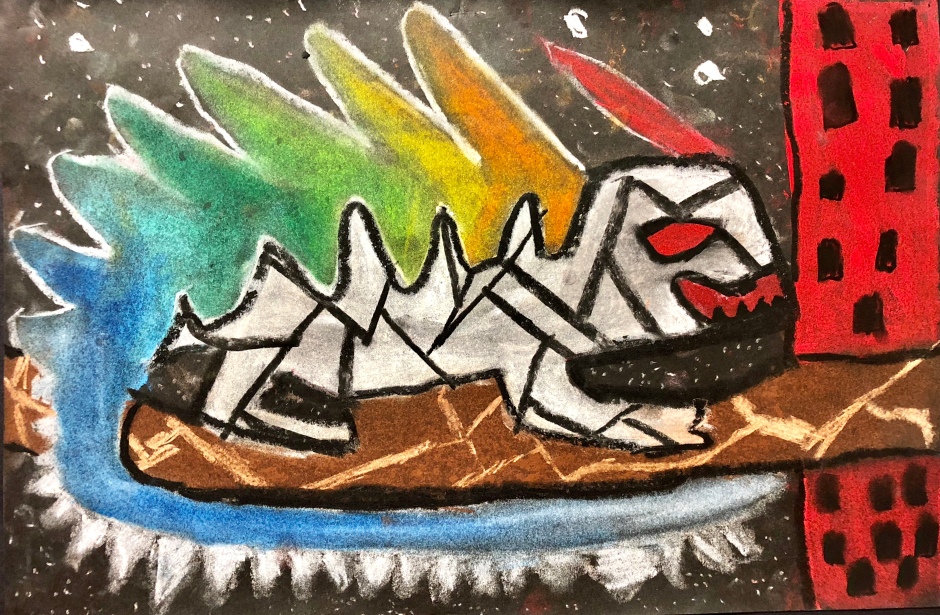 They drew their lizards and their backgrounds and then added a rainbow of colors with the chalk pastel.  It was a new medium for several students, and the ones who had some experience with it looked forward to using it again.  This project would be a killer if you expected to stay as clean as you were when you walked into class (or school for me), so just accept that “art is messy fun” and go with it.  We did wear smocks, use individual paper towels, and wash hands frequently, but there’s only so much you can do.

Last year, I thought I had communicated that the final step wasn’t filling in the lizards and backgrounds with chalk pastel, but it was outlining everything with black oil pastel to make it come alive.  However, most of last year’s 5th graders seemed surprised in a bad way that when they thought they were finished, there’s yet another big step.  This year I communicated it frequently throughout the project, and only got minimal moaning when it came to the last step of black oil pastel outlining.

I love this project, the artists are really proud at the end, and they have amazing art of their very own.  Hope you enjoy it too!

Since students work at a different speeds, the project extension was to create a lizard out of modeling clay. It was a great extension that worked their creativity in a different way. I loved seeing their 3D lizards come to life. 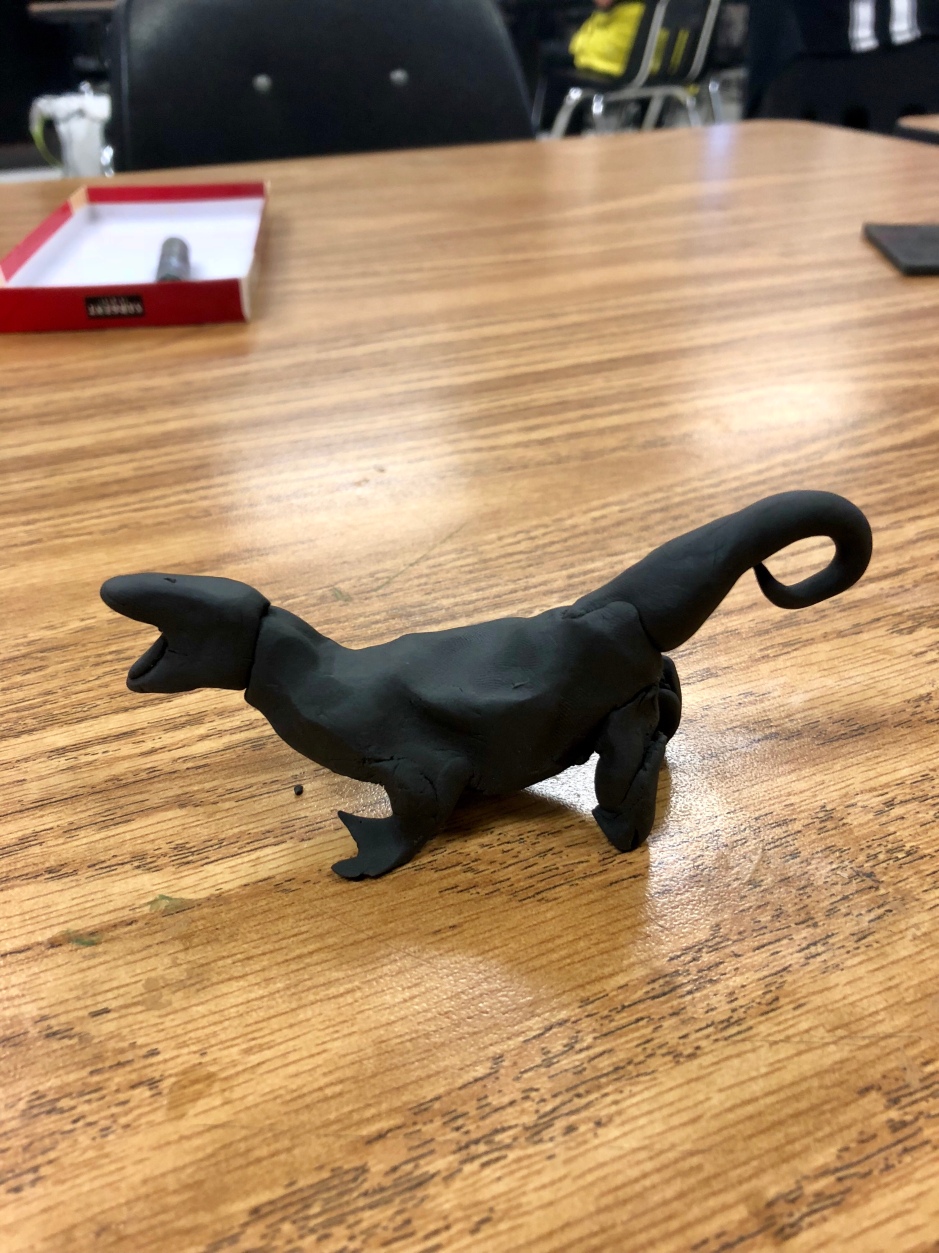 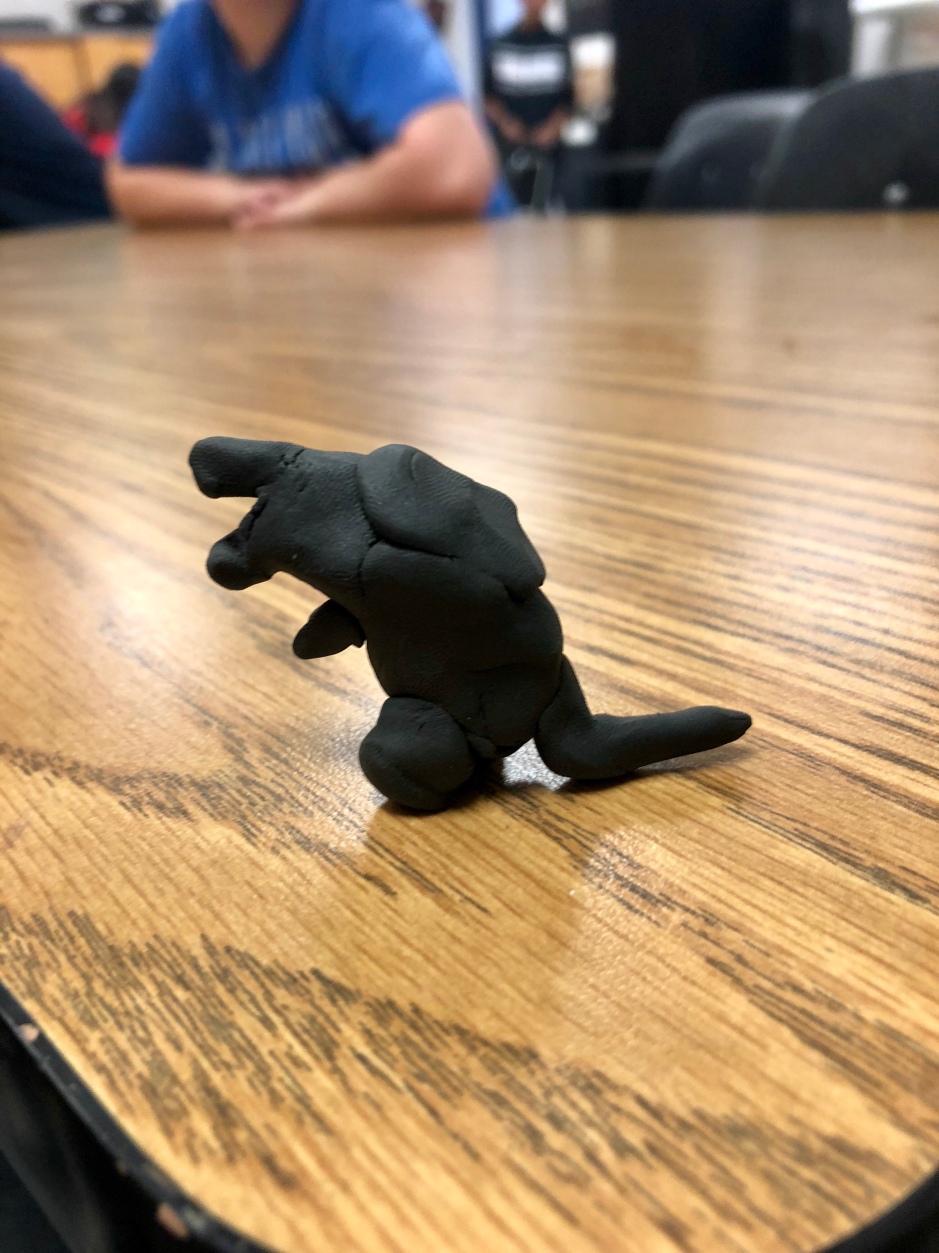 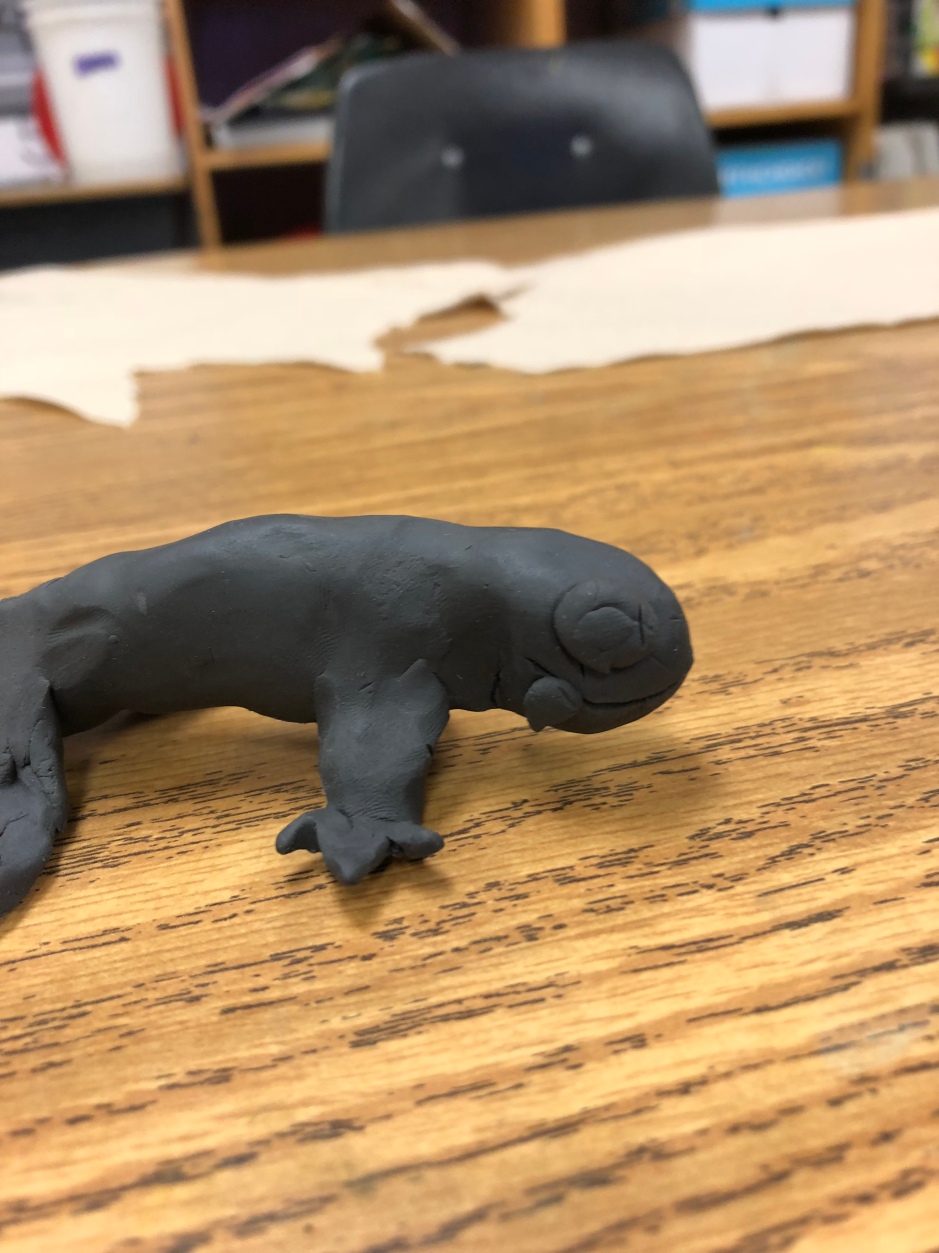 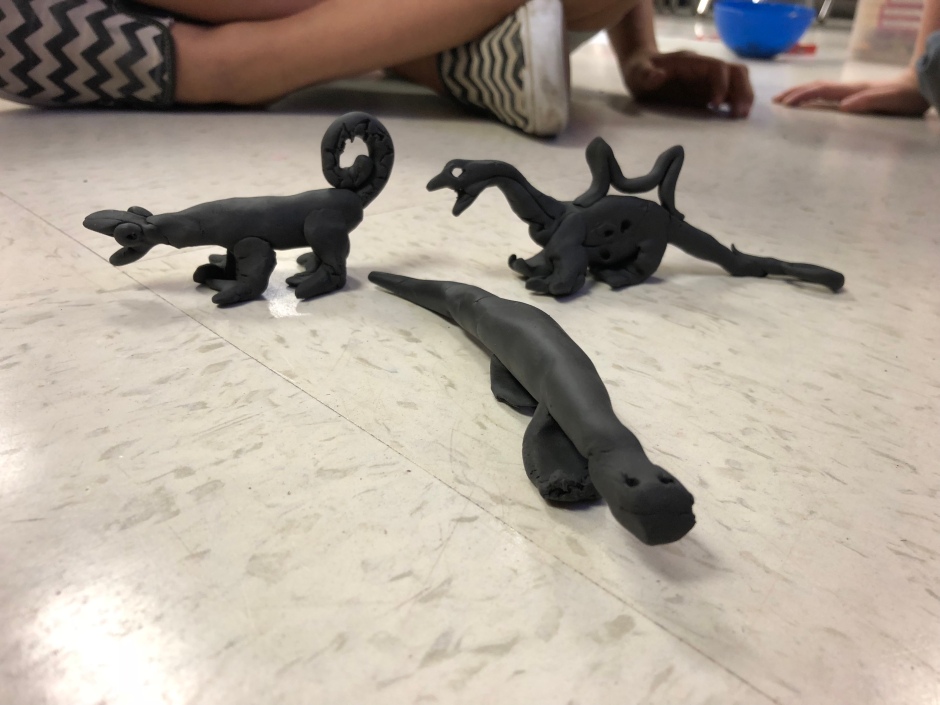